Our nightstand setup says a lot about how we like to end the day and start another. What’s On My Nightstand asks celebrities, entrepreneurs, and beyond what essentials they like to keep within arm’s reach.

What’s on and in your nightstand can reflect what’s currently keeping you busy in life. A full-time student might have piles upon piles of textbooks with earmarkings on every other page, hinting at the countless nights of “studying in bed” that ended in five minutes with the book on the floor and a pool of drool. Or, a vaccinated dater might be making up for lost time, with tangled jewelry and clutch bags collecting on the bedside table that suggests a pattern of late-night crashing.

For singer-songwriter and actress Teyana Taylor, her nightstand is a reflection of her role as a mom to 7-month-old Rue Rose Shumpert. Taylor’s older daughter Iman Tayla Shumpert Jr. is now five years old, so she’s able to wake up in the middle of the night and go to the bathroom, no problem. But when it comes to Rue, Taylor is prepared for anything — and I mean, anything — with her bedside table essentials .

“My nightstand is for me to be able to rest in the middle of the night because I’m telling you, there’s nothing like waking up in the middle of the night to a baby that’s hungry, and you don’t know where the bottle is because it’s all the way up in the cabinet, and the diaper might be in the bathroom, and the wipes might be downstairs,” Taylor told Apartment Therapy. “Now, I have all my stuff literally on that little table part right next to my bed. Like roll over, and it’s right there.” But of course, in the rare moments that she gets to herself, Taylor has a few items on her nightstand that hint at her wellness routine (which she takes seriously, a reason that she decided to partner with Olay Body ).

Read on for what’s currently resting on Rue’s — I mean, Taylor’s — nightstand: 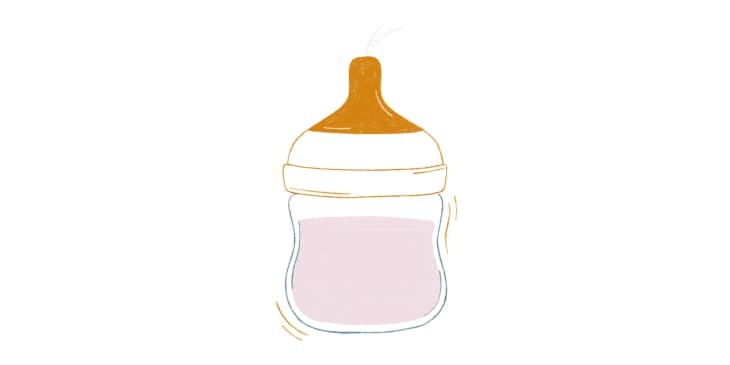 Glass baby bottle: If Rue wakes up but her diaper is dry, it’s most likely because she’s looking for a snack. Taylor keeps a glass bottle ready to go so Rue can be fed in record speed, and the chances of her going back to sleep increase (fingers crossed). I don’t have children, but this sounds like a Good Life Tip to keep in mind if and when the time comes. Diaper essentials: Taylor keeps Pampers diapers and baby wipes nearby during all hours of the night so she doesn’t have to frantically search for them while Rue is screaming at 2 a.m. “When she wakes up in the middle of the night, and she wants that wet diaper off, and you kind of pop up and you still don’t know what’s going on, everything is right there by my side,” Taylor said. “it’s very important to have everything I need for Rue, right next to me.” Pacifier: I guess this one is pretty self-explanatory if you’ve already caught onto the “keep calm and carry on with relaxing Baby Rue” theme.

Incense: Okay, now let’s get to the few things that make Taylor’s nightstand, well, hers. When Rue is napping in her bedroom, Taylor will head back to bed to light some incense and take a moment to unwind. Coconut oil: It’s easy to see why coconut oil is so popular — it can be used as a hair conditioner , a moisturizer, a body scrub, a makeup remover… the list goes on and on. (Plus, there are so many ways you can use it to take care of your home !). Taylor is a huge fan of coconut oil, even if it snags a spot on the nightstand only some of the time. “I use coconut oil so much, that that would be magical be on my bedside.”

Remote control: As Entertainment Editor, I can honestly say that a remote control is an important tool to keep within arm’s reach. While Taylor is burning her incense and putting on coconut oil, what could be better than not having to get up to turn on some good television programming? Well, maybe when Rue sleeps through the night, but other than that… nothing.

In her spare time, Nicoletta loves marathoning the latest Netflix show, doing at-home workouts, and nurturing her plant babies. Her work has appeared in Women’s Health, AFAR, Tasting Table, and Travel + Leisure, among others. A graduate from Fairfield University, Nicoletta majored in English and minored in Art History and Anthropology, and she not-so-secretly dreams of exploring her family lineage in Greece one day.